Sitting in bed on Saturday morning, I look down at Mack, our seven-year-old blue heeler/chihuahua mix. He’s twisted into a “c” shape with all four feet in the air, head thrown back, snoring. We call this position “Dog of Pompeii.” I pet his belly, and my hand’s movement showers dog hair onto the sheets, blankets, pajamas. An unpleasant smell of doggy body odor rises with the disturbance.

A year after we rescued this little lovebug from the pound, the time for Mack’s first regular vet checkup arrived. Along with the necessary vaccinations, I needed advice about his belly. He’d licked it red and wouldn’t leave it alone. The vet took one look at him and asked when his last bath was. 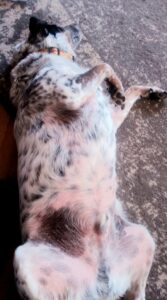 I couldn’t remember. Our Mack-Mack-Dog-of-Love hates bathing, so I didn’t force him.

Mama LA got the Vet Smackdown!

After a deworming treatment and an antibiotic shot, Dr. Randy sold me a bottle of special shampoo. “Give him a bath with this today and then once every other day until the redness disappears. After that, bathe him once a week with this shampoo to prevent this from happening again.”

He followed up the instructions with an especially stern “You can’t let your dog run your life” look.

My eyes fell in shame, and Mack caught them with his deep brown gaze of utter devotion. Could I betray those eyes?

Yes. If it meant a better life for him, I would do whatever it took.

Even if he hated me for it.

I straightened my shoulders, lifted my head and gave Dr. Randy a quick nod of acquiescence.

I used to have a mostly white border collie mix named Cappy. On his daily wanderings, he’d sometimes find the delightful feces of a cow, random wild animal, or another dog. Headfirst dives were the preferred method of ecstatic communion. Coming home, eyes wild with joy and body exhausted from his revelry, the smell would hit my nose before I saw the smears down the sides of his neck and body. His doggy grin never drooped as I’d say, “Oh Cappy! Poopy-dookie!”

With all of the shit sprayed off of him by the handheld shower head, cheap shampoo worked into his thick fur. Little pets convinced him of my love as I scrubbed him clean.

After a final rinse, I’d turn off the shower and command, “Shake it, baby!” His fierce shaking would send the first layer of wetness into a fine spray of mist and dog hair on the walls of the shower. A quick sideways slip out of the enclosure and I grabbed his towel for a final rubbing to wring however much more water I could out of his fur. Once freed, “Mommy-Doggy Time” ended with a mad dash to roll across every piece of carpet in the house.

With this experience and knowing how much Mack loves the love, I was certain that I could get him on board with “Mommy-Doggy Time,” despite the fact that he hates water.

Oh yes. Mack hates water. I’ve never seen a dog who hates water so much. On rainy days, he’ll go to the door, asking to go outside. I open the door. It doesn’t even have to be actively raining! The water pooling on the deck stops him. His next steps propel him back into the house. “Mack!” I’ll say, trying to sound stern. “Go out and do your business.”

“No way,” his eyes flash as he gives me a look over his shoulder. “I don’t have to pee that bad.” And he’s back to his little nest of a bed by the fireplace.

This dog has a bladder of steel!

My only recourse to prevent a bladder infection is to grab the lead and an umbrella. He’ll go if I will go.

“How about a walk?” I say as I hold the lead aloft. He runs to me, forgetting all about the rain. Walks are his second favorite thing, the first being lying between Stephanie and me on the bed and getting luxurious belly rubs.

The lead clips onto his collar and I open the umbrella as we walk out the door together. He follows, but stays close to me to get the benefit of our protection. He knows I need to see him do both kinds of business, but the pooping usually requires a bit of a walk to make happen. On particularly rainy days, he squats before we even leave the yard.

Returning home, at the edge of our lawn, I remove his lead and he zips up the steps to our front door. “Shelter!” He scratches at the door. “Let me in!” And as soon as the door cracks open, he plunges into the dry house, shaking the moisture from his fur. Tossing me a quick doggy grin, he picks a choice resting spot and cuddles in to dry completely.

A year into regular “Mommy-Doggy Time” sessions, and this is how it goes.

First, like a master spy entrapping her prey, I discreetly close all possible avenues of escape. One of our old towels gets placed near the shower.

As he snoozes, I start the water and wait until it’s the warm side of lukewarm. I take off my clothes. He suspects nothing until…

I remove his collar.

His eyes widen. Moving quickly, I scoop all twenty-five pounds of him up into my arms. I begin to sing a jolly song (loosely based on the theme song to the Howdy Doody Show).

Plop! Into the shower, sliding the doors closed behind me to block his final lunge. With all hope of escape behind him, he freezes into position. His head faces the front right corner and he stands, his body rigid with rebellion as he refuses to look at me.

Water sprays from our handheld shower head, soaking his fur.

I am now the Betrayer, the Traitor, Bringer of All That is Evil.

I switch from singing to cooing, desperate for redemption. “What a good boy. Scrub-scrub Mack-Mack.”

The special shampoo pours into my hand and I suds him up. As we wait for the required ten minutes for the shampoo to do its job, I wash myself and make small talk.

He stands still, staring out of the glass enclosure. What has happened to the good mommy? The one who takes him for walks and showers him with love instead of water? Who is this hell beast and why does she SING and COO while DROWNING HIM?!

Stephanie comes into the bathroom to pee, and he wills her to open the shower door. His little head droops when she wheels her walker back into the bedroom.

After my own cleansing, I rinse him off and slip out of the shower, closing the door behind me and grabbing his towel. As soon as I re-open the enclosure, he jumps out. The towel immediately drops over his entire body. He submits to drying until I pull the towel off his head. Then he takes off, his shaking progressing from nose to tail before he dives head first into the bedroom carpet. He bounds out of sight to continue his drying process on the hallway runner and finally the den’s large rug. Rolling onto his back, he’s off to the next location as he erases the lingering evidence of the shower.

I hear him singing his version of our shower song as he races around the house.

I don’t know where that shitty little asswipe got that nasty mouth, but he’s so cute. I can’t stay mad. I know I deserve it.

Once his fur dries, I’ll call him. “Mack! Time to put your collar back on.”

I hear the scramble of paws across the floor and he’s there at my feet, wagging his tail as hard as he can in a perfect sit, ears perked, and eyes glancing back and forth between the collar in my hand and my face.

“Oh, my collar! I love my collar! Are you going to put it on me now, Mom?” Wag, wag! Once the collar is back on his neck, he sits up straighter and preens.

The redness on his belly went away entirely in just a few days, and it never returned. Along with the reduction in redness, his shedding decreased by almost 75%. I’m assuming this has something to do with the regular bathing and also that we stopped feeding him chicken in any form after a friend told me her vet said that quite often dogs can be allergic to chicken. Now, along with the monthly baths, he gets homemade wet dog food made from hamburger, rice and sweet potatoes. Stephanie even makes a special gravy.

He loves being our dog. Except for Mommy-Doggy Time. 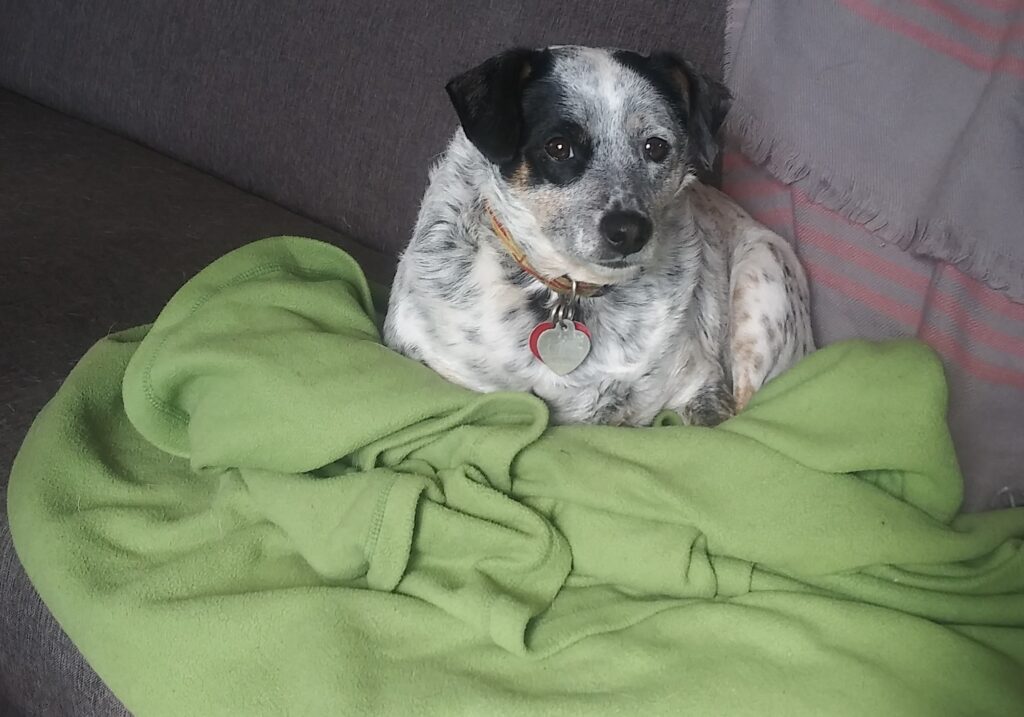