I went to a business mixer a week after the immunity kicked in from my completed vaccine. It was the first evening I’ve been out networking in at least two years. I was nervous; I didn’t know what to expect. There were so many people on the lawn of this gorgeous event venue. I pretended we were all attending a garden party, and resolved to make friends.
As I talked to a couple of fellows, I thought, “Oh! My people! It’s so nice to have a regular conversation with another gay person.” And then they would mention their wives (once she was standing right next to him!).
I felt good about my response as I managed to keep the surprise off my face (except maybe I got surprised eyes? I could have had surprised eyes), thinking “Gender is a spectrum. Gender is a spectrum.”

You see, I’ve met so many gay straight people.

I came out in the fall of 1992 and, along with the election of Bill Clinton, the state where I lived passed an amendment to their constitution which allowed active discrimination against gay people. While I navigated the waters of my new community, I watched my friends hide their sexuality from their families and co-workers. Immersed in the theater, my circle contained more out gay people than others, but the norm was still to hide ourselves.
Because of this, I learned quickly about “gaydar,” that mysterious force which points you towards other lesbian and gay people. Those little tells that reveal the possibility of a connection. While people might be out to their inner circle of friends, they rarely outed themselves to their family and workplace. That path still contains the possibility to destroy familial connections and livelihoods.
As such, at parties and while we watched talk shows, we would guess who was gay and hiding it. Soooooooooo much fun! Celebrities, of course, were the major topic, but as the wine flowed, so did our mouths, and we would make assertions about friends and family. These people set off our gaydar, but maintained actively straight lifestyles.

“When do you think he’ll come out and get divorced from her?”

“Well, you just know that they’re both gay. I wonder if they even ever had sex.”

“She joined our softball team and keeps giving Joyce these longing looks, but insists she’s not gay. Whyyyyyyy? They could be so happy together!”

Watching for the tells and then asserting our correctness when the person finally came out was exhilarating! And when it was a celebrity? Oh! The “See, I told you so”s dropped from our lips like a refreshing rain!
Plus, each new person asserting their homosexuality felt like another person added to our team. Another voice joining our ongoing battle for civil rights, the recognition of our humanity.
In those days, the chance that someone who had that little extra something in their manner was gay was pretty high because that was the only way to communicate your availability. Taking a chance to find that connection was dangerous, as we saw with the martyrdom of Matthew Shepard (along with many, many others). We spoke as we could.
When I talked of meeting gay straight people, I talked about meeting gay people who lived straight lives.

Now, of course, the sea has changed. A massive tide pulled us through that long, wretched time. As always, small tide pools and quicksand remain to snag us, but those moments feel fewer and further between. The young folks today don’t put up with the bullshit we took for granted. They force the conversation around free-flowing gender and sexualities, taking the legacy of the fight we started and punching it forward.

One fellow I know, who is a dear, dear friend, is the gayest straight man I’ll ever know, and his devotion to his wife has carried them through many hard times. I think it has to do with the fact that he’s so comfortable in himself, willing to express both his masculine and feminine sides.

His wife’s brother and his husband agree with me. Leaning in at a graduation party, he confided, “Gayest straight man I’ve ever met. And I live in San Francisco.”

Another friend tries hard to get the job of “gayest straight man I know” with his propensity to pull out drag at the drop of a hat. However, he’s an actor, and his closet contains tons of costumes including Batman and Indiana Jones, alongside Marilyn Monroe. I would say he’s more addicted to dressing up than being drawn to drag. Plus, his eyes light up with sparkly stars each time his drop-dead gorgeous wife comes into view. No hiding that look.
For those few years I worked for my local arts council, I ran the box office for one of their main fund raisers, a follies-style show of funny skits and songs. During the performance, actors hung out in the lobby area with me as they waited to go on-stage. One night, this fellow strode out of the green room completely done. The dress, the makeup, the wig, the heels—all fit the occasion. He flounced over to my little table and began chatting. “Oh my,” I said. “Look at you.”
He preened. He really is a gorgeous lady.

“You could be the gayest straight man I know.”

His smile faltered just a little.

“But someone else has got you beat.”

Delighted, he zipped off for his next entrance.

With my move to North Carolina, however, I’m meeting so many gay straight folks just wandering out in the wild. I’ll find myself in conversation with someone thinking, “You’re married to a woman?!” and “Sure. What’s your husband’s name? Charlotte?”

Oh, my brain is so snarky!

A young friend of mine, a person I crocheted an afghan for when they were born, amazed me when they came out as non-binary. The sheer audacity of rejecting gender took my breath away. I couldn’t imagine such a thing, growing up in the Arkansas heat. Simply embracing my bisexual nature took a leap, and discovering that I had deeper connections with women than with men seemed like a breach of etiquette somehow. I’d been using the right fork my whole life, and found that I preferred to use the salad fork to eat my steak.
To throw away the place setting entirely? I marveled at this young person. When they visited, they shared tales of relatives who didn’t even try as they thanked us for using their preferred pronouns. The casual cruelty seemed a slap in the face to me, but they took it in stride, and I followed their lead.

And so, I’ve been working on my thoughts and words. Asking people and noting their preferred pronouns. Knowing that using those pronouns expresses kindness, respect, and love.

These days, when my gaydar starts pinging, I wind it back. Not that everyone is out of the closet, but with less reason than ever to stay there and expanding views of who we can be in the world, my preferred way of being is to allow the person their own view of their sexuality and gender.

Gender is a spectrum.

Even if your wife’s name should be Larry. 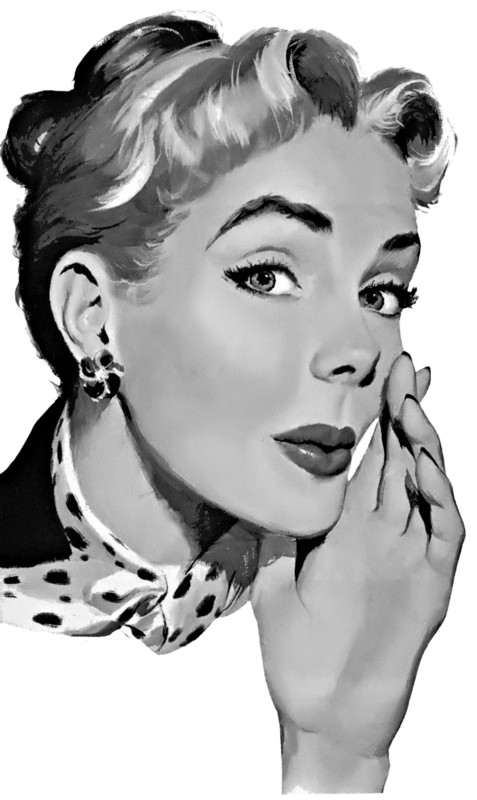